Impact of the Coronavirus on Austin & Central Texas Economy

Impact of the Coronavirus on the Austin & Central Texas Economy

Angelos Angelou spent nearly 12 years with the Austin Chamber of Commerce as Vice President of Economic Development and Chief Economist. He has analyzed and forecast the Austin and central Texas economies for 36 years, as well as presented 200+ economic impact studies to cities around the US. To say that he’s well respected locally is an understatement.

In our experience and opinion, Angelou is neither an optimist nor a pessimist, but a realist. This is incredibly valuable, especially during a crisis. His presentation on Tuesday did not paint a rosy picture, but also did not spell doom for the local real estate market. The entire webinar can be viewed here (1hr 10m) and our synopsis is available below.

At a high level, Angelou predicts that the US economy will begin to recover in late June or early July. We will see huge contraction & job loss between now and June, and these will be at a scale that can not be recovered in 2020. At year-end, will have seen 15% GDP loss and 15% to 16% unemployment nationally. The size and speed of this contraction is unprecedented. During the 2008 recession, unemployment peaked at 10% and the GDP contracted at 3%. The contraction will be short and fast with recovery beginning relatively soon, but it will take some time for everything to fully recover. Angelou predicts that 2021 will see +12% GDP gains and job growth to a 6-8% unemployment rate. It’s important to understand that these gains are also historic & unprecedented.

The constants that have always fueled Austin’s economy are job & population growth. That will not change, but it will slow. Austin typically adds ~60k people per year and Angelou predicts that we will add 35k in 2020 (roughly 60% of normal.) Austin will lose 45k jobs in 2020 and will gain 29k of those jobs back in 2021. The hospitality/leisure & retail industries will be the hardest hit. Austin’s technology sector seems to be relatively safe. 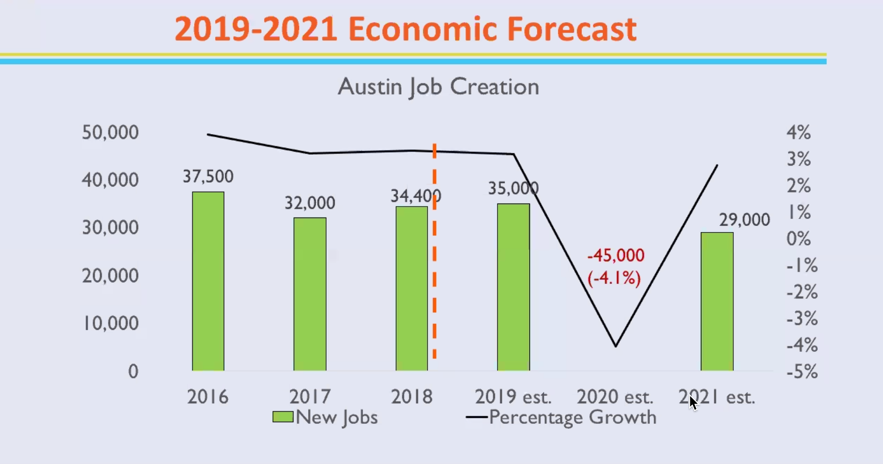 Angelou spoke briefly on the residential housing market. Inventory is very tight, and will remain so. Angelou predicts that will see an overall volume decrease of 12%-15% in 2020, caused largely by the shelter-in-place ordinance. To put that in perspective, the 2008 financial crisis caused a 30% contraction that lasted 3+ years. The local housing drop during this recession will likely be very short and roughly ½ as dramatic as 2008.

The hardest hit industries will be retail & hospitality/leisure. Angelou did not sugarcoat the fact that we will see many local restaurants & retail stores go bankrupt. We will likely see large retail corporations also close up shop. This will be the most lasting & visible effect of the recession and it will take time for new local businesses to open up and take their places. That said, Angelou was optimistic that “entrepreneurs are resilient & want to change the world.” He feels that Austin’s entrepreneurial spirit will help the city out of the recession incredibly well and we will once again fair much better than other metro areas.

We believe that a realistic and honest outlook is always the best outlook. Having weathered 2008, we do believe that this will be far shorter & less drastic than that period. Times will be tough, but short, and we will make it through them.

Past recessions affected the Austin real estate market in relatively similar ways. Sub-markets were affected differently. We do have data at the sub-market level. If you would like to discuss your specific property & sub-market, we would love to help you. We are happy to connect over the phone, video, or safely in person.