How Did Past Recessions Affect Austin Real Estate?

We’ve been monitoring the current crisis closely and have read quite a bit of speculation with regards to the coming recession from different credible sources. Some sources speculate that this will be a very short, V-shaped recession with a strong rebound in Q3, while other sources predict that it will be long and disastrous. We tend to look at the middle ground and predict that 2020 will be pretty bad, with some sort of rebound in Q3, and a return to a somewhat normal market in 2021. Regardless, all reputable sources agree that we’re entering a recession (which is defined by 2 consecutive quarters of negative economic growth.)

Since almost everyone can agree that we’re entering a recession, it’s productive to look at how the Austin real estate market was affected by past recessions. We discovered TAMU market data for the Austin-Round Rock MSA from 1990 to present, which is available for download here. We took this information and created 3 charts, which are available here.

Since 1990, the USA has experienced 3 recessions: 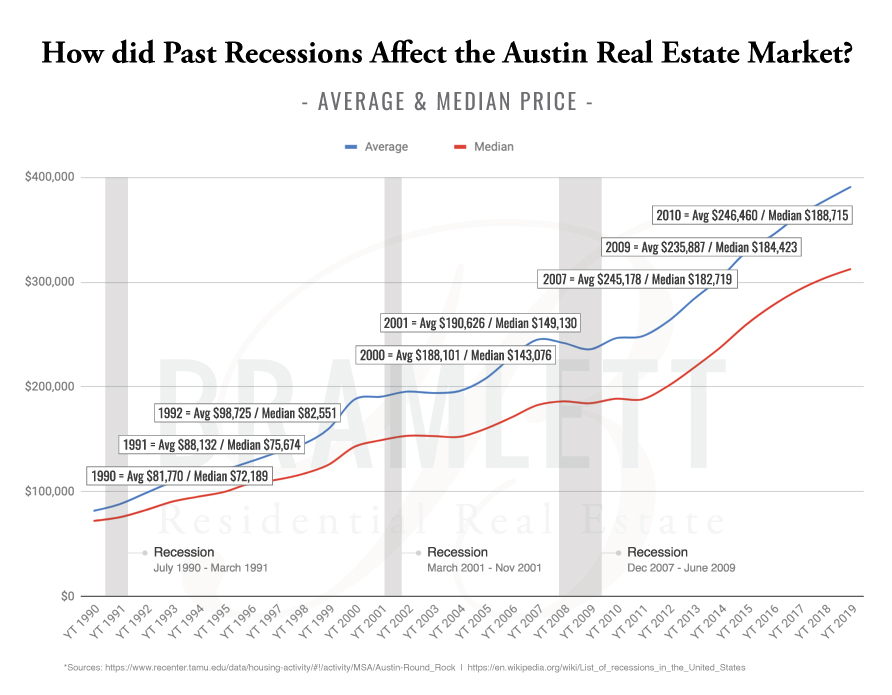 The most obvious question for any buyer or seller is “What did this do to home prices?” The surprising and consistent answer is, “Not much.” We don’t have data for 1989, but 1990 finished the year with an average sales price of $81,770 (whoa!) 1991 saw an average of $88,132, which is average appreciation of 7.7%. The 2001 recession saw a very similar lack of price changes. The average sales price increased in 2001 by 1.3% and it increased again in 2002 by 2.6%. The 2001 recession appears to have slowed appreciation, but prices didn’t decrease. (The median price saw similar movement.)

The 2008 recession was specifically caused by bad mortgages. The general consensus is that it crashed the real estate market. Looking at the numbers now, that wasn’t the case in Austin. In 2007, the average sales price was $245,178. The average price in Austin bottomed out at $235,887 in 2009 which is only a 3.8% decline. In 2010, the average price was $246,460, which is higher than the 2007 peak. Effectively, we regained the minimal losses that the recession caused 1 year after the recession ended. 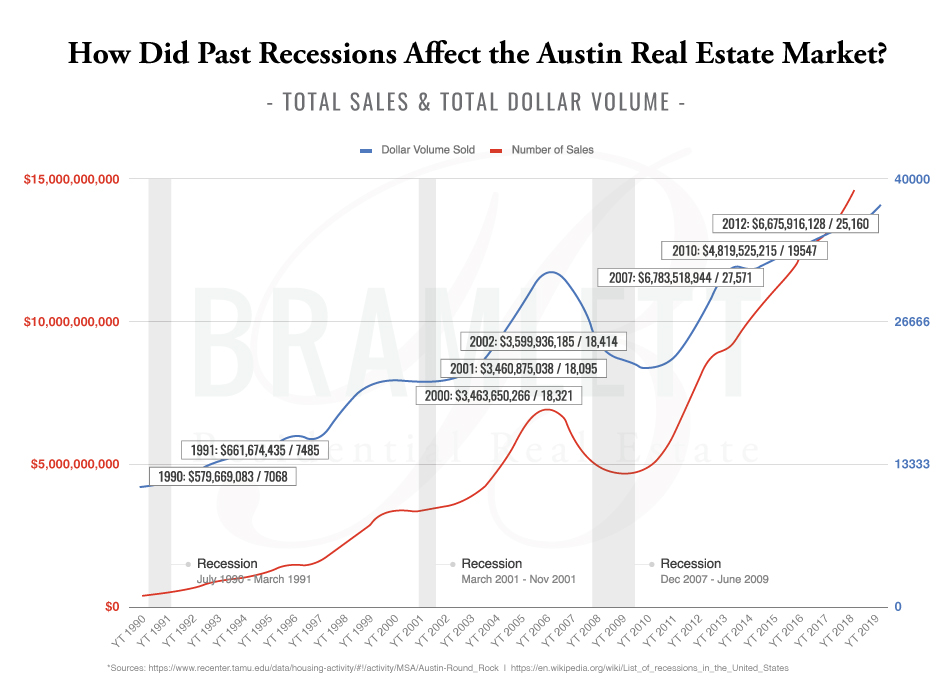 Again, 2008 showed more movement. During the 2008 financial crisis, there was a relatively steep national decline in price because of the large number of foreclosures (which were correcting bad loans.) Most people moving to Austin had homes to sell elsewhere that they couldn’t sell, so they had to rent in Austin and wait for prices to recover there. This took time. At the 2007 peak, there were 27,571 sales and $6.8B in volume. This bottomed in 2010 (one year after the recession ended) at 19547 sales and $4.8B in volume. The bottom represented a 30% decline in sales. This is why so many agents left the business and why sellers remember this as a difficult time. The market was relatively recovered by 2012 and 2013 saw relatively large gains over the 2007 peak.

What does this mean for buyers & sellers today? 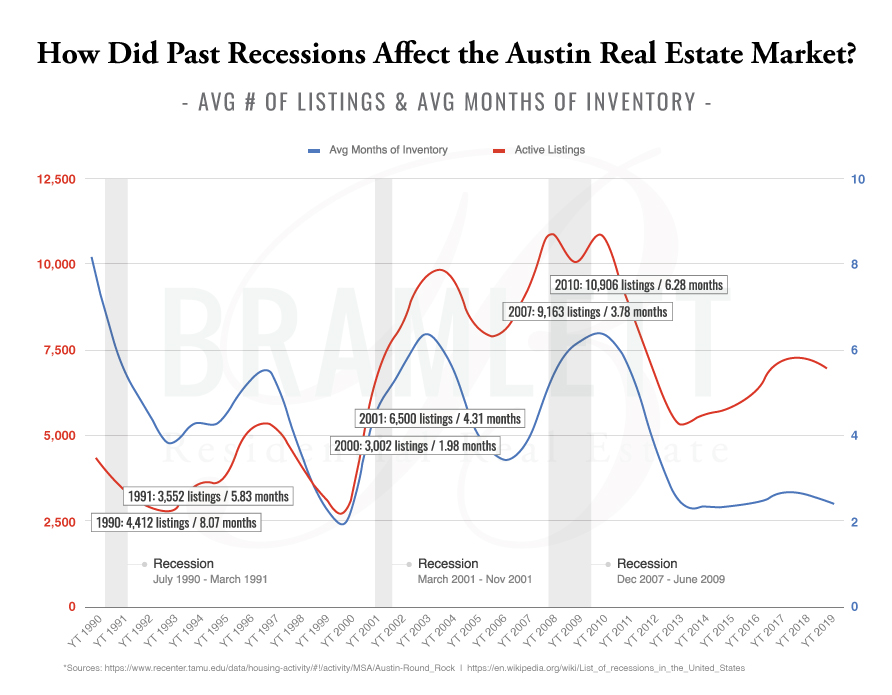 Recessions are very stressful because of the level of uncertainty. There is no realistic way for us to predict which past recession 2020 will most resemble. We think it’s unlikely that the real estate market will be affected as heavily as it was in 2008 because that recession was caused by a fundamental problem with real estate lending. The most likely scenario is that we will see relatively unchanged real estate prices and some level of decline in volume & units sold. I personally think that we’ll see a 20% to 30% decline in 2020, followed by a recovery in 2021 that will be anywhere from a 10% decline to a 10% increase in volume, depending entirely on how severe the virus is and how long the economy sits on “pause”.

If you would like to discuss your specific situation, we would love to help. We are happy to connect over the phone, video, or safely in person.