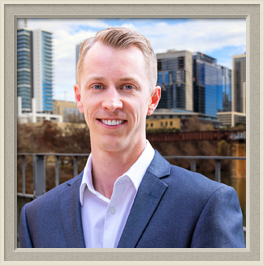 Shaun has had the pleasure of calling Austin home for over a decade. Originally from Wisconsin, he has worked all over the world. Shaun joined the United States Navy and volunteered for submarine service at the age of 18. That experience helped build his unmatched work ethic.

Shaun worked overseas in the offshore oil and gas industry as well as the automation industry before becoming a full-time Realtor in 2017. Since then he has produced over $25M in sales. Shaun works with buyers, sellers, and investors. Shaun also manages the Leander Wolfpack, a minor-professional football team he co-founded. In his free time, he likes to golf and takes his Corgi Bandit on adventures.

Shaun worked extremely diligently with us to find exactly what we were looking for. He never pushed, but neither did he ever give us the possibility of finding our perfect place. And what we have ended up with is perfect. On top of this, the mortgage financing was a huge hassle, which Shaun navigated with grace, often giving me encouragement when I was ready to throw the mortgage company to the wind! Great job all around.

Shaun was very helpful in helping us buy a new home while selling our existing home. When looking at new homes he was very resourceful. Really appreciated the help.

Shaun was an excellent realtor to work with in our recent home purchase. Very respectful of our time, questions, and property desires. He ensured a smooth purchase and worked quickly to address any questions that came up. He made the process simple and clean. I would highly recommend Shaun to work with in your real estate needs.

Shaun was amazing from start to finish ! Helped with closing and even getting stuff from the previous homeowners when they became unresponsive ! Deff puts in the extra hard work needed for a good working relationship.

Shaun is excellent. He is very knowledgeable and trustworthy. As a first-time home buyer, I felt the process of buying a home was surprisingly smooth. He was always readily available and answered all of my questions. I also felt he genuinely was looking out for my best interests. I highly recommend Shaun.

Over 1000 Client Reviews
Yelp
My wife and I relocated to Austin from the east coast and didn't know a realtor in town, so looked online. We called a few different people and really seemed to click with Eric. He knows Austin very well, which is what we really cared about, since we knew little about the various Austin neighborhoods.…
Google+
Eric is such a fantastic realtor! I had a distressed home to sell and Eric gave me the advice I needed to list it at a price that would sell. His suggested price was right on, and the house sold in a week! Eric was always available and replied quickly to all of our questions.…
Zillow
My wife and I found Eric online in 2011 when we were considering moving to Austin. Eric was very helpful showing around various neighborhoods during my business trips that made my decision to move to Austin easier. Unlike most agents, Eric also helped us find an apartment for around 6 months so that we could…
Call Now! 512-781-2402